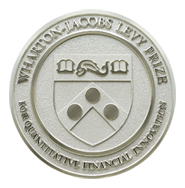 “We sought to create a prize that will make a difference. This prize isn’t just for a paper. This is a prize for financial innovation from peer-reviewed articles that have had an impact on the practice of financial management.”

The nominating period for the 2023 Wharton-Jacobs Levy Prize has closed. Nominations for the 2025 Prize may be submitted here.

The Wharton-Jacobs Levy Prize for Quantitative Financial Innovation, endowed with a $2 million gift, is awarded biennially. The recipient(s) will have published peer-reviewed articles demonstrating outstanding quantitative research that has contributed to a particular innovation in the practice of finance. The Prize may be granted to several authors who contributed to the same innovation, or to a single author. If given to two or more individuals, the Prize will be awarded to them jointly and the cash award equally divided between them.

The Wharton-Jacobs Levy Prize is distinguished from many other awards that recognize only research contributions because it encourages research that has practical applications. There is no time limit between the published articles and the practical application, as innovations can take years to develop. Recipients are chosen by committees of esteemed academics and practitioners.

2015
The second Wharton-Jacobs Levy Prize was presented to William F. Sharpe at the Jacobs Levy Center’s Spring 2016 Forum. Sharpe was recognized for his work in style analysis detailed in his paper “Asset Allocation: Management Style and Performance Measurement” (The Journal of Portfolio Management, Winter 1992). He received the Nobel Prize in Economic Sciences in 1990. Learn more

2017
The 2017 Prize was awarded to the late Stephen Ross at the Jacobs Levy Center’s fall conference on September 15, 2017 in New York. He was recognized for his work in the area of multi-factor asset pricing, memorialized in his 1976 Journal of Economic Theory paper “The Arbitrage Theory of Capital Asset Pricing.” Learn more

2019
The 2019 Prize was awarded to Professors Ray Ball and Philip Brown. They were recognized for their influential work linking stock prices to accounting data outlined in their paper “An Empirical Evaluation of Accounting Income Numbers” (Journal of Accounting Research, 1968). The Prize was presented at the Jacobs Levy Center’s conference on September 27, 2019 at the New York Marriott Marquis. Learn more

2021
The 2021 Prize was awarded to Professors Narasimhan Jegadeesh and Sheridan Titman. They were recognized for their research on momentum investing from their paper Returns to Buying Winners and Selling Losers: Implications for Stock Market Efficiency (Journal of Finance, 1993). The Prize was presented at the Jacobs Levy Center’s conference on September 16, 2022 at the New York Marriott Marquis. Learn more